The study of the ancient Mediterranean world has been both enriched and complicated by the diversity of cultures and states that occupied its shores throughout antiquity, and the huge range of evidence those cultures and states left behind. This diversity has led to the development of distinctive standard methodologies operating within sub-disciplines.

Our collaborative specialization exposes doctoral students to the full range of current research questions and methods in Mediterranean archaeology. The Mediterranean has been a key testing ground for many innovations in the field of archaeology, while the sheer intensity of exploration in the Mediterranean ensures the region’s continued relevance in the wider world of archaeology. Yet, this weight of research, especially with its distribution across so many research traditions, makes navigating the ancient world of the Mediterranean especially complex. One of its great strengths—the richness of its textual sources—is also its Achilles heel, as it has generated some deep-rooted scholarly assumptions about what kinds of histories we can build with, or without, textual evidence. For much of the Mediterranean past, we are faced with a ‘prehistoric’ record, without textual evidence – or, in some cases, with only administrative ‘laundry lists’; therefore, the narratives for these periods are based largely on archaeological datasets. However, mid-way through the first millennium BC the proliferation of various forms of textual evidence allows for quite different kinds of ‘historical’ accounts of society and its economic organization, political institutions, and religious beliefs. This deep qualitative difference in the evidence for ‘prehistoric’ and ‘historic’ periods has created entrenched disciplinary divisions not only in the methods employed but also the questions deemed relevant. The unique opportunities for long-term histories that the Mediterranean offers have thus remained largely unrealized. 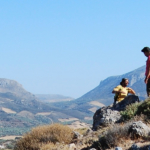 Yet this scenario of a ‘great divide’ has come under scrutiny in recent years. Ancient historians increasingly recognize that historical and art historical accounts of textual, visual, and material culture can be strengthened by the integration of archaeological methods. Moreover, study of the later prehistoric periods (such as Neolithic and Bronze Age) has now matured to a state where it no longer has to contend with only being ‘prehellenic’ or ‘pre-Homeric’, and can more positively explore long-term patterns that might stretch into the Iron Age. A new generation of students is being trained in how to combine the strengths of both archaeology and ancient history in order to carry out transversal research that stretches across some of these boundaries. The challenges in doing so are not trivial, however – to work with ancient texts requires quite a different skill set from excavation, or ceramic analysis. Yet, the rewards are worth it, because what we can see within this emerging framework is a fresh vision for how to think about the deep history of the ancient Mediterranean world.

The extent of the challenge requires a concerted interdisciplinary and collaborative effort to overcome these differences and establish a common platform. By bringing together the skills and experiences of faculty from Classics, Art, Near and Middle Eastern Civilizations, Anthropology, and The Study of Religion we can forge a unique blend of expertise and guidance for students in this new specialization. No such specialization currently exists in Canada, and yet a new generation of students is emerging with BAs in Classics, Art History, and Archaeology, and interested in pursuing just this kind of transversal research that cuts across domains.

Our academic objectives are to expose students to the range of current approaches on the cutting-edge of Mediterranean archaeology. From Braudel (La Méditerranée et le Monde Méditerranéen à l’époque de Philippe II,1949), to Horden and Purcell (The Corrupting Sea: A Study of Mediterranean History, 2000), and now Broodbank (The Making of the Middle Sea : A History of the Mediterranean from the Beginning to the Emergence of the Classical World, 2013), the merits of applying archaeological evidence to the reconstruction of long-term histories are clear. The Mediterranean offers unrivalled opportunities for exploring the complexities of economic, social, political and religious change over centuries and millennia, across a vast region that does behave in some ways as a ‘unit’, and yet is incredibly diverse with innumerable micro-ecologies. We are not the first to recognize this potential, as the Mediterranean has long been a testing ground for new ideas and methods in archaeology. Yet, there is still so much more that can be done, especially across disciplinary and methodological divides.